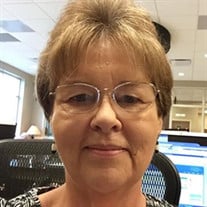 Donna Sue Stewart Clay, age 63, of Piney Flats, TN, passed away on Thursday, February 20 after an extended illness. She was born on August 3, 1956 in Williamson, West Virginia, a daughter of the late Alexander and Naomi Shupe Stewart. Along with her parents, she is preceded in death by her beloved husband of 19 years, Marcus Clay of Hickory, NC; and brother, Wendell Stewart. Donna spent the majority of her life in East Tennessee. She was a graduate of Sullivan East High School, attended Tusculum College, and earned a degree in Data Processing from Tri-Cities State Technical Institute. She was a devoted Christian and loved Southern Gospel music, particularly the Gaithers. Her love for her family was unbounded and she was happiest during family suppers, especially when it was followed by a Rook game. Donna also enjoyed family genealogy. She was a dedicated mother, daughter, sister, wife and grandmother. She used to volunteer at Holston Home for Children, worked as a church secretary for many years, and spent the last part of her working career with Women’s Health & Imaging Center in Johnson City, TN. Her work ethic was valued and she considered her co-workers to be a second family. She is survived by her son, Jon Anthony “Tony” Stewart and granddaughter Raeleigh. She also leaves behind her siblings, Annette Ward, Bruce Stewart and wife Billie, Danny Stewart, Peggy Martin and husband Dave, Deena Stewart, Mike Stewart and wife Canda, and Marty Stewart and wife Angie; and special friends, Christy Whitson, Tina Kiernan, Donna Waddell, and Barbara Hardin. Donna was also the aunt and great-aunt to many nieces and nephews that will remember her exceptional southern cooking, warm smile, and rule of always washing your hands before you eat. The family will receive friends on Sunday, February 23, 2020 from 2:00 PM – 4:00 PM at Oakley-Cook Funeral Home in Bristol, TN. A service will be held on Monday, February 24, 2020 at 2:00 PM at Littlejohn United Methodist Church in Lenoir, NC. Donna will be laid to rest alongside Marcus at Littlejohn United Methodist Church Cemetery following the service. Arrangements especially for Mrs. Clay and her family have been made through Oakley-Cook Funeral Home & Crematory.

Donna Sue Stewart Clay, age 63, of Piney Flats, TN, passed away on Thursday, February 20 after an extended illness. She was born on August 3, 1956 in Williamson, West Virginia, a daughter of the late Alexander and Naomi Shupe Stewart. Along... View Obituary & Service Information

The family of Donna Sue Stewart Clay created this Life Tributes page to make it easy to share your memories.

Send flowers to the Clay family.