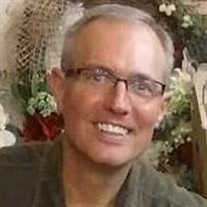 Denny Kale Wolfe, age 54, of Blountville, TN, transitioned to heaven on Monday, November 11, 2019, with his wife Chatty and family by his side after an almost 2 year battle with ALS. He was born on May 17, 1965 in Baltimore, MD, to the late Mr. Charles Wolfe and Mrs. Louella Wolfe. Along with his father, he was preceded in death by his son, Tanner Wolfe; and his brother-in-law, Bill Peters. Denny was a 1983 graduate of Tennessee High School and then joined the U.S. Airforce. Following his service to his country, he worked for the United States Postal Service for 28 years. He was Postmaster in Jonesborough, TN for 14 years. Denny loved his sons, Austin and Tanner. He fondly remembered cruises, family beach trips and fishing with the boys. A passionate craftsman, Denny worked in his home shop creating custom wood signs and restoring antique furniture. He enjoyed playing country and bluegrass music with friends. Denny recommitted his life to the Lord in recent years and was a faithful member of Grace Point Church of God in Bristol, TN. He is survived by his wife, Chatty Wolfe; son, Austin Wolfe; mother, Louella Wolfe; sisters, Phyllis Watkins and husband Steve and Brenda Peters; brother, Ray Wolfe and wife Debbie; many nieces and nephews; and close friends who were by his side to the end. The family will receive friends from 5:00 until 6:30 PM on Thursday, November 14, 2019 at Grace Point Church in Bristol, TN. A Celebration of Life will follow at 6:30 PM with the Rev. Richard Baker officiating. In lieu of flowers, memorial contributions may be made in memory of Denny Wolfe to Grace Point Church, 1318 Shelby Street, Bristol, TN 37620. The family would like to extend special thanks to Avalon Hospice and Grace Point Church for their love and support. Arrangements especially for Mr. Wolfe and his family have been made through Oakley-Cook Funeral Home & Crematory.

Denny Kale Wolfe, age 54, of Blountville, TN, transitioned to heaven on Monday, November 11, 2019, with his wife Chatty and family by his side after an almost 2 year battle with ALS. He was born on May 17, 1965 in Baltimore, MD, to the late... View Obituary & Service Information

The family of Denny Kale Wolfe created this Life Tributes page to make it easy to share your memories.

Send flowers to the Wolfe family.