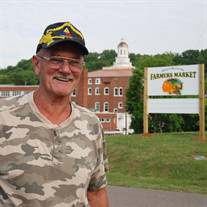 Dennis Lee Houser, age 74, of Blountville, TN, went to be with the Lord on Sunday, July 7, 2019 at his home. Dennis was born on March 23, 1945 in Blountville, TN, a son of the late Clifton George and Lois Hensley Houser. Dennis was a veteran of the U.S. Army having served during the Vietnam Era where he was a helicopter mechanic. He was a long-time member of Blountville Christian Church where he served as a Deacon and Elder. He also taught the Willing Workers Sunday School Class for over 30 years. He retired after working as the Principal of Lynn View Middle School and Educator for Sullivan County Schools after 27 years. Dennis was involved in numerous community outreach organizations including the Farmers’ Market and Sullivan County Historical Preservation Association where he was involved with the restoration of downtown Blountville, especially the Old Deery Inn. He also served as a Commissioner and was on the Education Committee. He also served as a school and community coach. Dennis’ lifelong passion was serving the community of Blountville. He was an avid farmer and enjoyed the outdoors. Those left to cherish his memories include his loving wife of 47 years, Kathy Dunham Houser; sons, Eric Houser and wife Jessica Lynne and Adam Lee Houser and wife Leslie Lynn; sister, Linda Cross and husband Chris; brother, Morgan Houser and wife Gloria; brother-in-law, Jack Dunham; grandchildren, Bailey and Matthew Reed; and several nieces, nephews and cousins. The family will receive friends on Wednesday, July 10, 2019 from 5:00 until 7:00 PM at Blountville Christian Church, Blountville, TN. The funeral service will follow at 7:00 PM with Dwight Shaffer officiating. The Eulogy will be given by Mayor Richard Venable. Military Honors will be performed by DAV Chapter #40 Honor Guard. In lieu of flowers, memorial contributions may be made to Blountville Christian Church Building Fund, 1680 Blountville Boulevard, Blountville, TN 37617. The family would like to extend special thanks to Avalon Hospice and the many prayers and support from family and friends. Arrangements especially for Mr. Houser and his family have been made through Oakley-Cook Funeral Home & Crematory.

Dennis Lee Houser, age 74, of Blountville, TN, went to be with the Lord on Sunday, July 7, 2019 at his home. Dennis was born on March 23, 1945 in Blountville, TN, a son of the late Clifton George and Lois Hensley Houser. Dennis was a veteran... View Obituary & Service Information

The family of Dennis Lee Houser created this Life Tributes page to make it easy to share your memories.

Send flowers to the Houser family.