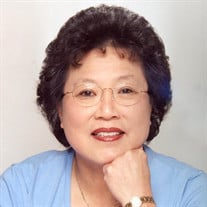 Den Shya Stewart, “Billie”, age 68, passed away in her home on Wednesday morning, October 21, 2020, following a brief illness. Born November 10, 1952, in Taipei, Taiwan, Billie was the sixth child of the late Cho Hsu Suai San and Cho Chen Tung Mei, also of Taiwan. In Taiwan schools, the age cut off for kindergarten was September 1. Billie’s father wanted her to start school early so he changed her birth year to 1951, where it remained on all her official documents. It wasn’t until she returned home for her mother’s funeral and found her birth certificate that Billie learned her true birth date. In 1972, Billie’s friend invited her to come listen to some friends sing at a local pub. Bruce was there as well. Billie was fascinated by speaking English to an American and they became quick friends. Bruce helped Billie learn English and it was at one of her English classes that she chose the name “Billie” from a baby book. After accepting Bruce’s proposal for marriage, Billie flew to El Paso, TX on April 19, 1974. They then drove across the country to Piney Flats, TN and were married May 17, 1974, at Edgefield United Methodist Church. After her wedding, Billie got her first job in the USA at a sewing factory, Imperial Reading, in Piney Flats. She then went to work in the deli at King’s Store in Bristol, TN where she became known for her happy personality and funny sense of humor. Her most important job was that of a mother and then grandmother. She loved her kids with a tenacity that cannot be matched. She loved them so much, in fact, that everything she ever bought, she purchased it in 3’s so that each of her children had their very own. Billie loved the Lord and was a lifelong child of God. She attended Chinquapin Grove Baptist Church, where she was baptized last fall, and Rockhold United Methodist Church for Wednesday night Bible study. She was a selfless doer who lightened the world with her love and generosity. Billie was the greatest “doer” that many have ever known. Every single memory that has been shared involves her doing for others. Making her yummy rice, running errands for someone, working in innumerable roles at church, visiting the sick, calling to check on others, or to make sure others were in the loop about someone else who had a need. She worked with the elderly and with children and with everyone in between. She had a true servant’s heart. In addition to her parents, Billie was preceded in death by her siblings, Wayne Cho, Daisy Lee, Hsiung Cho, Maria Teng and Joseph Hsu. She leaves behind her loving husband of 46 years, James Bruce Stewart of Bluff City, TN and three children; Carrie Feathers (Grant) of Piney Flats, TN, Adam Stewart (fiancé Anastasia) of Indian Rocks Beach, FL, and Ivy Perry (Hunter) of Greer, SC. Billie was also blessed with seven grandchildren: Jenna, Blakely and Graeson Perry, Audrey and Andrew Davis, and Charleston and James Feathers. She also leaves behind a sister, Linda Chen and brother, Cho Gun Fu, both of Taiwan and numerous nieces and nephews around the world. Billie has too many friends on this world to name, but special mention to Reba and Lora Anderson of Bristol, TN who have been right by her side up until her last day, her very best friend of 46 years, Priscilla Scott (Ray) of Blountville, TN, who taught her everything she ever knew, and her “good son” Josh Franklin (Amanda) of Bluff City, TN, whom she claimed as her very own and was honored to be called his “mama,” after the passing of his own mother. The family will hold a private ceremony on Friday, October 22, 2020, at the home of Billie’s daughter Carrie. It was her wishes to be cremated and then buried with her husband at the time of his passing. In lieu of flowers, memorials may be made in Billie’s honor to the Haven of Rest Rescue Mission or Isaiah 117 House. Arrangements especially for Billie and her family have been made through Oakley-Cook Funeral Home & Crematory.

The family of Den Shya Stewart "Billie" created this Life Tributes page to make it easy to share your memories.