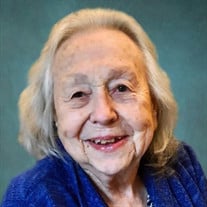 Beloved wife, mother and “Mammaw”, Dana M. Boggs, age 90, passed away on May 4, 2021 at Avenir Memory Care in Knoxville, Tennessee. Dana was born in Cannel City, KY; one of 6 children born to the late James and Eliza Amyx Hurt. She graduated from Cannel City High School and attended Fugazzi College in Lexington, Ky. She was a longtime member of Trinity United Methodist Church in Bristol, VA. As a young woman Dana moved to the big city of Lexington, KY where she worked at Cobb’s Grocery store until she was hired as a dispatcher “troubleshooter” for Kentucky Utilities Board (she fondly remembered her call sign: KIB821), riding with the line crews to work when the weather was bad and she was needed, often during the night. She met her soon to be husband, Warren Boggs of Kings Creek, KY, on a blind date that didn’t seem promising until he called again months later, and she sealed the deal with a lemon icebox pie. She learned later he didn’t like the pie but ate it anyway to impress her. She married Warren on September 2, 1955 in Lexington, KY. They were together 56 years until his passing in 2011. As much as she enjoyed her career, she gave it up to pursue another career – motherhood, when her first child Sandy was born. Four more children followed over the next 13 years and she never looked back. She was friend to everyone but defended her children with vigor when it was warranted. She was famous for her home-style cooking, known especially for her “Mammaw rolls”, fried chicken and derby pie. Homemade pizza was a favorite when teens showed up unexpectedly for impromptu Friday night card games. Her big station wagon became the second bus for local kids late for school or ball practice, where she never failed to show up with cold slushy drinks for the whole team. Many of those kids continued to visit her long after her children had flown the coop. She was the family financial wizard, using her intelligence and creativity to keep her large family well fed and clothed. She was a talented seamstress making many of her children’s outfits over the years including costumes, formal wear, quilts for grandbabies and one daughter’s wedding dress. Dana and Warren stayed in their small house, scrimping and saving so that all of her children could go to college debt free. Her children are forever thankful for her many sacrifices and teaching them the things that are truly valuable in life. She loved her family with all of her heart. Her children and grandchildren all remain close and much of that is because of her strong conviction that family ties are of utmost importance. Until Warren passed and Dana needed assisted living, their house was the central meeting place for holidays and family gatherings. She always told her children that the sweetest sounds were those of her family all together, talking and laughing (and we could get loud!). Dana is survived by daughters, Sandy Kosarski and husband Roger of Roanoke, VA; Cindy Martin and husband Preston of Bristol, VA; Cathy Nuttall and husband David of Knoxville, TN; Jean Boggs-Rowe and husband David of Bluff City, TN; son, Ken Boggs and wife Cindy of Fincastle, VA; and nine grandchildren: Katie Forsyth and husband Jason of Harrisonburg, VA; Kara Newman and husband Joe of Blacksburg, VA; Zach Martin of Bristol, VA; Anna Boggs of Manhattan, NY; Joseph Nuttall and wife Mallari of Atlanta, GA; Emily Nuttall and partner Cody of Lenior City, TN; Gwendolyn Martin of Bristol, VA; Matthew Rowe and Eliza Rowe of Bluff City, TN; great-grandchildren Noah and Lucy Newman of Blacksburg, VA; a sister, Vernice Nickell of Lexington, KY, sisters-in-law Sumiko Boggs of Eugene, OR, and Helen Cooper of Kings Creek, KY, along with many nieces and nephews. The family will receive friends from 12:00 p.m. until 2:00 p.m. on Saturday, May 8, 2021 at Oakley-Cook Funeral Home in Bristol, Tenn. A committal service and entombment will follow at Mountain View Cemetery in Bristol, Va. In lieu of flowers, donations to the Alzheimer’s Association are greatly appreciated. Please donate by clicking here or by mail at 225 N. Michigan Ave., Fl. 17, Chicago, IL 60601 Arrangements especially for Ms. Boggs and her family have been made through Oakley-Cook Funeral Home & Crematory.

The family of Dana M. Boggs created this Life Tributes page to make it easy to share your memories.

Send flowers to the Boggs family.