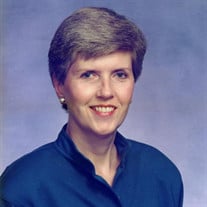 D. Diane Opie Thomas passed away, September 11, 2020 with her family at her side. Diane was born November 21, 1939, in Milwaukee, Wisconsin, to the late Eldon Opie and Dorothy Pooley Opie. Diane grew up in the village of Scales Mound, Illinois. During her school years she was a fine athlete, pitching for the boy’s baseball and softball teams in an era when her community had no female sports. She was also a promising pianist, playing duets with the church organist for Sunday worship at the Methodist church. She graduated Valedictorian, class of 1956 from Scales Mound High School matriculating to the University of Dubuque as a music major. At the University of Dubuque, she was a member of the Concert Choir and the ingénue lead in "Down In The Valley". On March 2, 1957, she married F. William (Bill) Thomas, her high school sweetheart, of Warren, Illinois, who was also a music major at the University. During her four years at Dubuque, she gave birth to their first two children, Deborah and Tom, and graduated “cum laude” at age 20. Kathryn was born in 1961 during the Oregon years. In 1960, upon both receiving Bachelor of Arts in Music Education, the family moved to Oregon, Illinois, where Bill began his teaching career. Diane taught private piano lessons in the home and was Bill's performance accompanist for the Oregon High School Choirs. Diane was soon teaching in the elementary school as well. In 1967, Bill received a teaching assistantship at Northwestern University and the family moved to Evanston, Illinois. Their anticipated one year stay in Evanston evolved to three when Bill was employed by the New Trier High School music department. During this time, Diane continued graduate study at Northwestern and taught physical education in the demonstration school of the National College of Education in Evanston. In 1970, Diane's family moved to Bristol, where Bill would serve as the choral director at Sullins College and Diane as staff accompanist. She accompanied recitals, the choir and a number of Broadway Musicals during the six years before Sullins closed. Upon arriving in Bristol, Bill was appointed Director of Music at State Street United Methodist Church and Diane directed the childrens' choirs and accompanied the Youth Choir. She continued to be an active participant in SSUMC Chancel Choir, Handbell Choir and frequent accompanist. Following the closure of Sullins College, Diane was employed as an elementary music teacher for the Bristol Virginia School System. For seven years she maintained a program loved by her many students at Van Pelt Elementary School. In 1981, she starred as Maria in Theater Bristol’s production of The Sound of Music. In 1983, she was promoted to the position of choral director at Virginia High School. For nineteen years her students excelled in concerts and competitions, sending record numbers of students to District and All Virginia Choruses. In 1995, her Virginia High School Chorale auditioned for and was invited to perform at the Kennedy Center in Washington D.C. and in 1996 she was a finalist for the Virginia Music Educator of the Year Award. In her role of music educator, Diane accompanied numerous nationally known choral directors at district choral events. After retirement from her high school position, Diane was a part-time accompanist for Emory & Henry College for six years. She was a past member of the A! Magazine Editorial Committee, a member of PEO, The Bristol Music Club and Junior League, accompanying their "Follies" for many years. In 2016, Diane and her husband, Bill, were recipients of the Arts Alliance Mountain Empire Arts Achievement Award. Diane was the epitome of positive thinking and kindness and never believed in anger. She always knew there was a better way to solve any problem. She was fully devoted to her family in which she attempted to instill this trait. She is survived by her three children: Deborah Diane Thomas of Broomfield, Colorado, Thomas William “Tom” Thomas and wife, Kimberly Muench of Estes Park, Colorado, and Kathryn Kay Thomas of Yardley, Pennsylvania; two grandsons: James Thomas Moyer and William Muench Thomas; three great granddaughters: Kya, Myaira, and Khalani Burrell; a sister: Carolyn Opie Munro of Northbrook, Illinois; two special brothers-in-law: Robert J. Thomas and William J. Munro; and several nieces and nephews and grand nieces and nephews. Diane was preceded in death by her husband of 62 years, F. William “Bill” Thomas; grandson Nychai Damone Burrell; and an infant grandson, Benjamin Rio Thomas. In lieu of flowers, memorial contributions may be made to a college fund for Diane’s descendants. To contribute, please contact Oakley-Cook Funeral Home or mail checks to Oakley-Cook Funeral Home, 2223 Volunteer Parkway, Bristol, TN 37620. A service will be announced at a later date. Arrangements especially for Mrs. Thomas and her family have been made through Oakley-Cook Funeral Home & Crematory.

D. Diane Opie Thomas passed away, September 11, 2020 with her family at her side. Diane was born November 21, 1939, in Milwaukee, Wisconsin, to the late Eldon Opie and Dorothy Pooley Opie. Diane grew up in the village of Scales Mound, Illinois.... View Obituary & Service Information

The family of D. Diane Opie Thomas created this Life Tributes page to make it easy to share your memories.

Send flowers to the Thomas family.