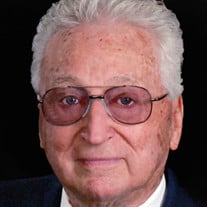 Clifton Edward DeHart, age 93, passed away on Saturday, November 28, 2020 at Ballad Hospice House. He was born on July 3, 1927 in Meadows of Dan, VA, a son of the late Hobart and Anna Alderman DeHart. Along with his parents, he is preceded in death by his sister, Mabel DeHart, and brothers, Ellis and Nelson DeHart. Clifton graduated from Tazewell High School and a week later entered the U.S. Navy. Following basic training, he was allowed to enter Navy Metal Aircraft School in Norman, Okla. where he graduated at the top of his class. He spent the remainder of his Navy enlistment there until 1948. Clifton then enrolled at Bluefield College where he studied chemical engineering and was one of the top of the class. He started working at S.E. Massengill Co. and continued his studies to also obtain a degree from East Tennessee State University. Clifton retired after a 40 year career from GlaxoSmithKline. He was a member of the First Baptist Church of Bristol and was elected to serve as deacon numerous times. He served as chairman and was instrumental in getting the chapel built at the church. He was a member of the Jaycees and president of the Civitan Club where he received the award for leadership and service. Clifton was honored with the Civitan of the Year award on two separate occasions. He enjoyed volunteering for the King Benevolent Fund and the Bristol Regional Hospital. Clifton enjoyed swimming, bowling, and boating. The things that brought great joy to him were his family and traveling. He is survived by his loving wife of 62 years, Anna DeHart; daughter, Dena Cunningham; son, Paul Cole and wife Amanda; grandchildren, Chase Cunningham, Austin Cole, Laura Lewis and husband Matt, and Juliana Buchanan and husband Shea; great grandchildren, Reid and Brooks Buchanan and Lyndie and Locke Lewis; brother, Bob DeHart; brother-in-law, Jerry Cross and wife Willette; sisters-in-law, Yoko Cross and Irma Dugger; and several nieces and nephews. The family will hold a private funeral service at Oakley-Cook Funeral Home. In lieu of flowers, memorial contributions may be made to First Baptist Church, 1 Virginia Street, Bristol, VA 24201 or the charity of your choice. The family would like to extend special thanks to the staff of Ballad Hospice House for their kind care. Arrangements especially for Mr. DeHart and his family have been made through Oakley-Cook Funeral Home & Crematory.

Clifton Edward DeHart, age 93, passed away on Saturday, November 28, 2020 at Ballad Hospice House. He was born on July 3, 1927 in Meadows of Dan, VA, a son of the late Hobart and Anna Alderman DeHart. Along with his parents, he is preceded... View Obituary & Service Information

The family of Clifton Edward DeHart created this Life Tributes page to make it easy to share your memories.

Send flowers to the DeHart family.