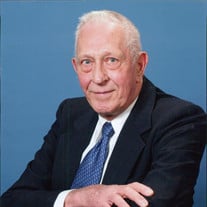 Cecil Warren Hankins, 87, of Bristol, TN, went to be with his Heavenly Father on Monday, February 21, 2022 at the Bristol Regional Medical Center following a brief hospitalization. He was preceded in death by his father, John Leck Hankins and mother, Sallie Mae Hankins, a brother, Kenneth Hankins, sister-in-law, Evelyn Hankins, sister, Margaret Bailey and brother-in-law, Frank Bailey. He is survived by his wife and love of his life of 60 years, Frances G. Hankins, his cherished children, Dr. Edward W. Hankins (Dr. Jane S.) of Memphis, TN, Benjamin G. Hankins (Tracey) of Hixson, TN and Francene H. Johnson (Barry) of Lebanon, TN, his adored grandchildren, Brooke Johnson, Kate, Tucker and Cecilia Hankins and Jackson Hankins, his brothers, David (Judy), Marvin (Patsy), Don (Sue), Dan (Marian), Jim (Marlyn), Rev. Buford (Rev. Phyllis) and Carl (Nancy), his sister Martha Worsham (Andy), his brother-in-law, Dr. James E. Gillespie (Shirley), as well as many nieces and nephews. During his 87 years of life, he was a loving son, husband, father, grandfather, uncle, neighbor and Jack-of-All-Trades. Cecil was born on April 9, 1934 in Indian, Virginia and grew up in nearby Cedar Bluff. He graduated from Richlands High School in 1952 and then joined the U.S. Navy during the Korean War, where he served from 1953-1957 and achieved the rank of Machinist Mate First Class. Upon discharge, he went to work at Raytheon Company in Bristol, TN. He married the former Frances Margaret Gillespie on July 1, 1961. Cecil was a member of Aldersgate United Methodist Church, the Bristol Senior Show Choir where he and Frances graced the stage of nearly every show with a spotlight dance, the VFW and several square and round dance clubs. Frances and Cecil danced together for over 60 years. At Raytheon, Cecil was a Tool and Die Maker where he did ultra-precision work. He was frequently tasked with seemingly impossible jobs and was often able to find a solution. Occasionally, an impossible job was assigned to him outside of work such as when he successfully undertook the repair of a broken Easter Egg which was the only egg his son, Eddie, found at his first Egg Hunt. His meticulous approach to work extended to the home where he maintained a well-stocked work shop where among other things he built fine furniture such as a coffee table and matching end tables, a Murphy Bed, a jewelry cabinet and much more. A long running creative project of Cecil’s was creating beautiful hand bells from scrapped parts of shoulder fired anti-tank Dragon missiles from Raytheon, discarded spools from Burlington Mills textile plant in Bristol which were used for the clapper and hand-crafted wood turned walnut handles. These bells were true works of art and through the years, he gifted over 90 of them to family and friends. Given the origin of the scrap metal from a defense contractor plant, Cecil always said that making these bells was his way of beating swords into plowshares. The family will greet friends to share memories on Thursday, February 24, 2022 from 12:00 pm to 2:00 p.m. followed by a celebration of Cecil’s life at 2:00 pm at Oakley-Cook Funeral Home with Pastor Paul Griffith and Pastor Buford Hankins officiating. A committal service will follow at Mountain View Cemetery, Bristol, VA. Family and friends will serve as honorary pallbearers. In lieu of flowers, memorial contributions can be made to Aldersgate United Methodist Church on 136 Highridge Street in Bristol, TN.

Cecil Warren Hankins, 87, of Bristol, TN, went to be with his Heavenly Father on Monday, February 21, 2022 at the Bristol Regional Medical Center following a brief hospitalization. He was preceded in death by his father, John Leck Hankins and... View Obituary & Service Information

To view the live stream service please click on the link below: https://view.oneroomstreaming.com/authorise.php?k=1645580523168656

Send flowers to the Hankins family.