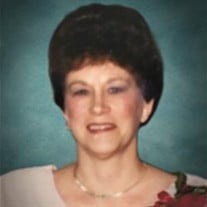 Carol Jayne Burchette Smith passed softly from this worldly journey to sing a new song on Friday, December 20, 2019. Jayne was born on January 13, 1935 and grew up in Pennington Gap, Va., the oldest of three daughters, to the late Arthur Thomas Burchette and Iris Elizabeth Adams. Along with her parents, she was preceded in death by her husband, Jimmy Smith, to whom she was married from 1953-2000; and her son, Bill Smith. Surviving Jayne are her son, Jim, Jr. of Kingsport, Tenn.; daughter, Beth Gilmore and husband Randall of Bluff City, Tenn.; grandsons, Caleb and wife Kristi of Knoxville, Tenn. and Seth Gilmore and fiancé Dani Snapp; great granddaughters, Harvie Rose and Eliana Joy; sisters, Polly Lewis of South Pittsburg, Tenn. and Margie Ballard of Atlanta, Ga.; and several nephews, a niece; and several cousins. She attended Carson Newman College before marrying and later became the receptionist/office manager at Bristol Speech and Hearing Center for many years and held the same position at The Country Club of Bristol. She was a former member of First Baptist Church in Pennington Gap, Va. and Euclid Avenue Baptist Church in Bristol, Va. Before her health declined, she enjoyed playing the piano, camping, and spending time with family and friends. The family will receive friends from 1:00 until 2:00 pm on Sunday, December 22, 2019 at Oakley-Cook Funeral Home in Bristol, Tenn. A Funeral Service will follow at 2:00 pm with Caleb Gilmore officiating. A private Committal and Interment Service will be held for the family at Forest Hills Memory Gardens in Abingdon, Va. The family would like to extend special thanks to the ICU and 2 West nursing staff at Bristol Regional Medical Center and nurses and staff at The Hospice House in Bristol, Tenn., especially to Angela who spent three nights attending to Jayne with great love and care. Arrangements especially for Mrs. Smith and her family have been made through Oakley-Cook Funeral Home & Crematory.

Carol Jayne Burchette Smith passed softly from this worldly journey to sing a new song on Friday, December 20, 2019. Jayne was born on January 13, 1935 and grew up in Pennington Gap, Va., the oldest of three daughters, to the late Arthur... View Obituary & Service Information

The family of Carol Jayne Burchette Smith created this Life Tributes page to make it easy to share your memories.

Send flowers to the Smith family.