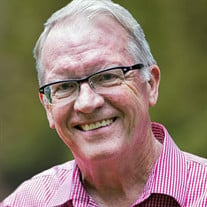 Psalm 73:26 “My flesh and my heart fail, but God is the strength of my heart and my portion forever.” Bryan Logan Kaylor, 68, of Bristol, Virginia, passed away on Monday, January 28, 2019 peacefully at his home. Logan was born in Valdosta, Georgia, the firstborn of Frank and Alene Kaylor. Frank worked for the Norfolk-Southern Railway, and moved the Kaylor family twenty-nine times across the south before Logan had graduated high school. Logan attended Virginia Intermont College, graduating with a degree in Medical Technology in 1984. He met his wife, Dawn, a fellow student in the nursing program, in their Anatomy and Physiology class, and were married in 1981. They settled on the Kaylor farm outside of Bristol, and raised and homeschooled their ten children. He was currently employed with Quest Diagnostics in Bristol, TN. Logan was a follower of Christ, a loving husband, and beloved father. He was known for his humor, his kindness, and his generosity. He was a role model to all who knew him: always willing to help those in need, always kind, patient, and loving. He was wonderfully funny, and could keep his humor and grace in the darkest of times. He could remember movie quotes from every movie he had ever seen, he was a master of trivia facts, and baked the best bread east of the Mississippi. He loved Monty Python, good satire, and could make even the most ordinary story entertaining. He was a source of strength, wisdom, and trust. Together with Dawn, they created a home of freedom, creativity, and love for their children and everyone who entered it. He was preceded in death by his father, Frank, and his mother, Alene. He is survived by his wife Dawn, his ten children, Laura, Molly, Joel and his wife Lauren, Luke, Sam and his wife Judith, Logan Jr, Landon, Kirk, Abby, and Sarah; his granddaughter, Aidan, and his brother Frank Jr. The family will receive friends from 5:00PM until 7:00PM on Wednesday, January 30, 2019 at Oakley-Cook Funeral Home in Bristol, TN. A memorial service will follow at 7:00PM with Pastor Carl Young and Pastor TJ Hutson officiating. The family would like to extend a special thanks to his fellow co-workers at Quest Diagnostics for all their love and care shown to Bryan. In lieu of flowers, memorial contributions may be sent to the Samaritan’s Purse, PO Box 3000, Boone, NC 28607 or by visiting samaritanspurse.org. Arrangements especially for Mr. Kaylor and his family have been made through Oakley-Cook Funeral Home & Crematory.

The family of Bryan Logan Kaylor created this Life Tributes page to make it easy to share your memories.

Send flowers to the Kaylor family.