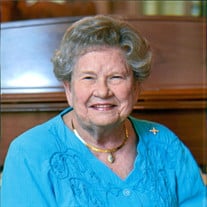 Barbara Alice Baker Thurmond, age 92, passed away peacefully in her sleep on August 24 in her apartment at Oakmont of Gordon Park in Bristol, Virginia. The family is extraordinarily grateful to the entire staff at Oakmont, who loved and cared for Barbara—and for her family—until her very last breath! Barbara was born on February 21, 1929, to Lily Bess and T. Harri Baker, Jr., in Memphis, Tennessee, where she lived most of her life. A common question asked of Barbara’s children was, “Did your mother ever work?” The answer was always that she had a paid job for only a couple of years because “proper” young ladies got married and did not work, but she volunteered everywhere and touched hundreds of lives with her vibrant love and infectious spirit! Barbara graduated from Central High School in Memphis and earned a bachelor’s degree with a major in art from Randolph-Macon Woman’s College in Lynchburg, Virginia. Barbara was an active member of the Pi Beta Phi sorority, attended numerous reunions, and was president of the Pi Phi Memphis Alumnae Club. Barbara and her college roommate remained lifelong friends and travel companions, sharing dream trips to Germany, Egypt, and the Holy Land. Following college, Barbara returned to Memphis where she was a decorator for two years with E.C. Denaux Interior Decorators and a volunteer driver for the American Red Cross. In 1954 she married Andrew Jackson “Jack” Thurmond, Jr., and they celebrated over 51 years together—sharing a home and family, travels around the country, and their love for God and church. Favorite activities included reading whodunit mysteries and needlepointing countless works of art. Besides being an incredible homemaker who delighted friends and family with her scrumptious cooking and ever-changing seasonal and holiday décor, Barbara’s greatest delight and legacy was serving the church. Barbara grew up at Calvary Episcopal Church in Memphis; on returning to Memphis in 1963, she and Jack joined the Church of the Holy Communion. Barbara shared her love for God in so many ways throughout the years. At Holy Communion she taught Sunday School; served on the Vestry; was a lector, chalice bearer, and Lay Eucharistic Minister; and served as president for the Episcopal Church Women. She was a devout member of the Order of the Daughters of the King, serving as chapter president and as directress of Holy Communion’s Junior Daughters. The annual Daughters’ Christmas party in her home was legendary! In the Diocese of Tennessee, Barbara was both western district and state diocesan president of the Episcopal Church Women. She completed a four-year course of study in Education for Ministry through the School of Theology in Sewanee, Tennessee, then served on the committee that oversaw the division of the Diocese of Tennessee into three dioceses. Barbara continued to serve the Diocese of West Tennessee as a member of the Commission on Ministry and the Bishop and Council, during which time she started the Pennies for Hunger Diocesan Program. Undoubtedly, some of her favorite times were during the twelve years she volunteered at the Emmanuel Episcopal Center as a mentor for 2nd through 5th grade girls, some of whom stayed in touch with her well into adulthood! In her later years in Memphis, Barbara lived in the Garden Homes in the Kirby Pines LifeCare Community, where she celebrated life with old friends and made many new friends. Never one to actually “retire,” Barbara participated in numerous community activities, chaired the Garden Homes Association, hosted happy hours, and delighted all the neighbors with her daily golf-cart runs with her cherished dog Harley. Barbara was preceded in death by her parents, her husband, her brother Harri Baker (“Bud” to her), and her grandson Drew Thurmond. Barbara is survived by her three children, Libby Banton (Bill) of Columbia, MO, Mary Wampler (William) of Bristol, VA, and Andy Thurmond (Nicole) of Flower Mound, TX; eight grandchildren, Brandon Banton (Jordan) of Wichita, KS, Christina Banton of Columbia, MO, Mary Katherine Charles (Ray) of Tampa, FL, Will Wampler of Abingdon, VA, Kyle Thurmond of Bridgeport, TX, Abby Russell of Auburn, AL, Peyton Thurmond of Flower Mound, TX, and Patrick Thurmond of Flower Mound, TX; three great-grandchildren, Lilly and Walker Charles and Aiden Banton; three nieces, Cathy Chatman, Jana Hunter, and Susan Annison; and numerous grandnieces and grandnephews. Family and friends are invited to a celebration of Barbara’s life on Monday, August 30, at 11:00 a.m., at the Church of the Holy Communion in Memphis. The family will have a private internment of ashes at 9:00 a.m. in the family plot at historic Elmwood Cemetery under the direction of Canale Funeral Home. In lieu of flowers, the family requests memorials be made to the Church of the Holy Communion (4645 Walnut Grove Rd, Memphis, TN 38117) or to the Church Health Center (1350 Concourse Ave Suite 142, Memphis, TN 38104).

Barbara Alice Baker Thurmond, age 92, passed away peacefully in her sleep on August 24 in her apartment at Oakmont of Gordon Park in Bristol, Virginia. The family is extraordinarily grateful to the entire staff at Oakmont, who loved and cared... View Obituary & Service Information

The family of Barbara Alice Baker Thurmond created this Life Tributes page to make it easy to share your memories.

Send flowers to the Thurmond family.