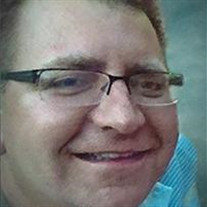 Avi Aaron McCallister, age 42, of Bristol, TN, passed away Monday, November 11, 2019 at his home. Avi was born on September 20, 1977 in Akron, Ohio. He was preceded in death by his mother, Esty Crissman; maternal grandparents, Dr. Issac and Susan Yetiv; paternal grandparents, Bill & Adah Bell; and maternal uncle, Dr. Steve Aviv Yetiv. Avi spent a good part of his youth and teenage years at the Tri State Baptist Children's home located in Bristol, TN. Special thanks to the staff of the children’s home and especially Rosa Emma Honeycutt for her love and guidance in Avi's life. Avi owned & operated Roofing by McCallister in Bristol, TN and was involved in the roofing & contracting trade for over 25 years. He was a graduate of Brookside Baptist Academy in Bristol, TN. Avi formerly worked at Lyon Roofing in Piney Flats, TN with owners, Bret & Kim Lyon, before starting his own business. Bret, Kim and family considered Avi as a part of their family as well. He will be dearly missed by everyone who had the opportunity to meet him. Avi is survived by his father and stepmother, Bill & Sharon McCallister of Davenport, FL; son, Carson of Bristol, TN; sister, Bethany Crissman of Akron Ohio; maternal uncle, Jack Yetiv; and paternal aunts, Linda Smith & Joann Wright. The family will receive friends from 6:00 PM – 8:00 PM on Friday, November 15, 2019 at Oakley-Cook Funeral Home in Bristol, TN. The Celebration of Life will follow at 8:00 PM with Bret Lyon conducting the service. Music will be provided by Brookside Baptist Church. The graveside service will be held at 11:30 AM on Saturday, November 16, 2019 at Sunrise Cemetery in Bluff City, TN. Pallbearers will be Les Lingerfelt, Wesley Barb, Ryan Barb, Dave Warden, Matthew Zollinger, Tim Bowman, Jared Couch & Tyler Lyon. Those wishing to attend the graveside service are asked to meet at Oakley-Cook Funeral Home at 11:00 AM on Saturday, and proceed in procession to the cemetery. In lieu of flowers, memorial contributions may be made to the Tri-State Baptist Children’s Home, 1792 Vance Tank Road, Bristol, TN 37620. The family would like to extend special thanks to Edilia Ponce, Ashley Gibson and all others that have helped support and care for Avi over the last couple of years during his illness. Arrangements especially for Avi and his family have been made through Oakley-Cook Funeral Home & Crematory.

Avi Aaron McCallister, age 42, of Bristol, TN, passed away Monday, November 11, 2019 at his home. Avi was born on September 20, 1977 in Akron, Ohio. He was preceded in death by his mother, Esty Crissman; maternal grandparents, Dr. Issac and... View Obituary & Service Information

The family of Avi Aaron McCallister created this Life Tributes page to make it easy to share your memories.

Send flowers to the McCallister family.