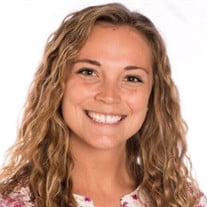 Anna Grace Janice Cooper, age 23, of Bristol, TN, passed in peace on Monday, June 17, 2019 at Bristol Regional Medical Center after a courageous 9 month battle with cancer. She was born December 16, 1995 in Bristol, VA to Dr. Todd and Jennifer Cooper. She was preceded in death by her grandmother, Thalia Cooper; grandfather, Gary Meyers; and aunt, Kimberly Cooper Wright. Anna was raised on a farm and had a strong connection to all animals from childhood which lead her to a love of horseback riding. She was an active member, numerous ribbon winner and champion of the Holston Pony Club. Anna was a 2010 graduate of St. Anne Catholic School where she competed in both Cross Country and Basketball. As a 2014 graduate of Tennessee High School, she was a member of the National Honor Society, Beta Club, Civinettes and Yearbook. Anna displayed outstanding athletic ability as a member of the THS Volleyball Team, distance athlete on the track team, and a 2012 Cross Country Team Region Champion and State Qualifier as well as a 2013 Cross Country Individual State Qualifier. Upon graduation from Tennessee High, Anna earned a full scholarship for Track and Cross Country to Tennessee Tech University in Cookeville, TN. Her leadership ability earned her the title of Team Captain for 3 years for both Cross Country and Track. Academically she earned a spot on the Dean’s List each of her 8 semesters at TTU. In her final semester, she helped the Golden Eagle Track Team win its first Indoor and Outdoor Ohio Valley Conference Team Championships while also earning herself the OVC Medal of Honor for her perfect academic standing in her senior year. Anna was a member on the Distance Medley Relay Team that placed second at the 2018 OVC Indoor Championships. While at TTU, Anna served as a team representative on the Student Athlete Advisory Committee all 4 years she attended. During that time, she was instrumental in the creation and success of a program named Back Pack Buddies that has continued to provide weekend meals for over 1,000 underprivileged youth in the Cookeville community. In May 2018, Anna received her Bachelor’s Degree in Nutrition and Dietetics. In fall 2018, Anna had begun her dietetic internship at East Tennessee State University where she was pursuing a Master’s Degree in Nutrition. Shortly after the semester began, Anna was diagnosed with a rare form of cancer. She is survived by her parents, Dr. Todd and Jennifer Cooper of Bristol, TN; brothers, Ryan and Liam Cooper of Bristol, TN; grandfather, Douglas Cooper of Bristol, TN; her loving fiance´, Daniel Williamson of Union City, TN; and several loving relatives. The family will receive friends from 1:00 until 3:00 PM and from 5:00 until 7:00 PM on Friday, June 21, 2019 at Oakley-Cook Funeral Home in Bristol, TN. A Funeral Mass will be held at 10:00 AM on Saturday, June 22, 2019 at St. Anne Catholic Church with Father Chris Hess officiating. The committal service and interment will follow at Glenwood Cemetery in Bristol, TN. Pallbearers will be Drew Shumaker, Thad Branch, Austin “Pookie” Sims, Wesley King, Jordan Roth and Brenna Huber. Flowers will be accepted, or memorial donations may be made to TTU Athletics, P.O. Box 5057, Cookeville, TN 38501. Please note a memo for Anna Cooper or Backpack Buddies. The family would like to extend special thanks to everyone who cared for, supported and prayed for Anna during her illness. Arrangements for Anna and her family have been made through Oakley-Cook Funeral Home & Crematory.

The family of Anna Grace Janice Cooper created this Life Tributes page to make it easy to share your memories.

Send flowers to the Cooper family.