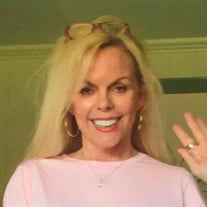 Ann Robinson Arnold Smith, “Robin,” of Madison, GA died at home on the 20th of December 2021, surrounded by her three children, Zan, Andrew, and Alyson, and her brother, Davy. Born in Bristol, TN, on the 14th of October 1951, the daughter of the late Virginia Jones Arnold and Walter Davis Arnold, Robin graduated from Virginia High in 1970 where she was voted “Best All-Around Senior” as well as Homecoming Queen. She went on to the University of Georgia where she made lifelong friends, pledged Kappa Kappa Gamma, and was awarded many honors by her peers: Miss Greek Week, Miss Modern Venus, Spirit Queen, and Homecoming Court. She graduated Cum Laude in 1974. She worked in Hilton Head, SC during and after college before becoming a flight attendant for American Airlines, based in New York City and then Nashville. While in Nashville, she met and married Bertram Leon Smith III and they settled in Dallas, TX to raise their three children. At age 65, Robin bravely embarked on her last adventure: she moved to Madison, a town she’d fallen in love with, and designed and built a beautiful home to be a haven for her family and grandchildren. She became a grandmother (“Rah Rah”) just four months before she died – the “sweetest gig ever,” as she’d say. Our Robin will be remembered for how completely she devoted herself to her family; her strong character and moral compass; her sharp wit and sneaky intellect; her humility; her playful sense of humor; and the gentle grace with which she accepted life’s blessings and losses. She delighted in the small things and took time to ponder both the joyful and painful intricacies of life – always paying attention, asking questions, not just telling you that she loved you but explaining, often through misty eyes, WHY she loved you. You couldn’t help but feel completely adored and warm in her presence. She radiated love and had many passions: interior design, soul music, traveling, cooking, gardening, painting, and - most of all - her family. There was nothing she loved more than having all of her “chilluns” home, as she did for the last two months of her life. While we will miss her endlessly and a world without her seems dim, we rejoice in knowing that she is at home in the everlasting arms of Jesus and reunited with so many family members whom she loved so dearly. Robin was preceded in death by her parents, Virginia Jones Arnold and Walter Davis Arnold; her sister and best friend, Virginia Alyson Arnold Lee; and her brother, Guy Bryan Arnold II. She is survived and loved deeply by her sons, Bertram Alexander Smith of Dallas, TX and Andrew Arnold Smith of Austin, TX; daughter Alyson Arnold Smith Page (and husband James) of Austin, TX; granddaughter Holland Grace Page of Austin, TX; brothers Dr. Walter Davis Arnold, Jr. of Bristol, TN and Robert Jones Arnold (and wife Anne) of Louisville, KY; and nephews Robert Jones Arnold, Jr. (and wife Leah) of Dallas, TX, Winston Lee Arnold (and wife Phaedra) of Louisville, KY, and William Richard Arnold of Louisville, KY. There will be a private graveside ceremony on Thursday the 23rd of December 2021. In lieu of flowers, memorial contributions may be sent to Healing Hands Clinic of Bristol, TN at www.healinghandshealthcenter.org or 245 Midway Medical Park, Bristol, TN 37620.

The family of Ann Robinson "Robin" Arnold Smith created this Life Tributes page to make it easy to share your memories.

Send flowers to the Smith family.