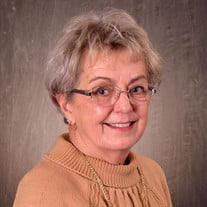 Anita Criswell Greene, age 72, of Bristol, Tennessee, passed away on April 1, 2022 at Ballad Hospice House, Bristol, Tennessee. She was born March 23, 1950 in Bristol, Virginia. She is preceded in death by her parents, James and June Criswell and her husband Ron Greene. Anita was a 1968 graduate of Virginia High School. She began her career joining Bristol Steel in 1976 and in 1981 joined Morrison Molded Fiber Glass Co. (now Strongwell Corp.). She served as an Executive Assistant, a position she held for 36 years, first working with the Executive Vice President & Chief Operating Officer and then the President & CEO. Anita retired in 2018. During her time at Strongwell, she had a thirst for learning new technologies and more efficient ways of doing things and made herself a valuable member of the Strongwell team. She became the "go to" person for other administrative employees for help and advice with many types of projects. Anita was a breast cancer survivor and became an advocate for the cure of that disease working several years with the Relay for Life fundraising events in Bristol. She served on the Board of Directors of the YMCA of Bristol for 6 years and was heavily involved in Strongwell United Way Campaigns. Over the past 8 years, Anita performed numerous volunteer support functions for the Birthplace of Country Music organization. She was an accomplished seamstress and loved to bake, cook, and garden. She is survived by her stepdaughter Carey Hinrichs (husband Heinz), step-granddaughter Avalon, all of St. Petersburg, FL; brother James C. Criswell, Kinston,NC ; nephew Byron Criswell (wife Meredith), Kinston, NC; brother-in law David Greene (wife Catherine), Jackson, TN; aunt Sharon Shipley, Forest City, NC; uncle Jake Jacobs, Johnson City, TN and numerous cousins and caring friends and neighbors. Memorials for Anita `may be made to: Birthplace of Country Music, 416 State St. A, Bristol, TN 37620 or The American Cancer Society. This obituary was lovingly written by friends from over the years.

Anita Criswell Greene, age 72, of Bristol, Tennessee, passed away on April 1, 2022 at Ballad Hospice House, Bristol, Tennessee. She was born March 23, 1950 in Bristol, Virginia. She is preceded in death by her parents, James and June Criswell... View Obituary & Service Information

The family of Anita Criswell Greene created this Life Tributes page to make it easy to share your memories.

Send flowers to the Greene family.