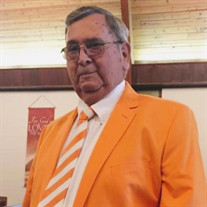 Allen Harold Haga, 85, of Bristol, TN, gained his heavenly body on Friday, October 8, 2021 at his home. He was born in Bristol, TN and was the son of the late Sam and Dottie Haga. In addition to his parents, Allen was preceded in death by his wife, Betty Lou Jones Haga, brothers, Kenneth and Fred Haga, his sister, Opal Haga, and his son, Mark Allen Haga. He was a graduate of Blountville High School. Allen held several career positions in sales. His fondest work was in the restaurant business. Allen opened most of the original Long John Silver’s restaurants in the southeastern United States. He participated in Cedric’s Fish and Chips restaurant in Bristol, and operated his beloved Bonanza Steakhouse on W. State Street. Allen was a faithful and foundational member of Aldersgate United Methodist Church. He participated in the choir, Boy Scouts, UMYF leadership, church leadership, United Methodist Men (past Holston Conference President), several mission trips, and many other outreach and evangelism events. Allen was an Army Reserve veteran, a Mason, and a lifetime member of the Jaycees. His greatest accomplishments were that he never met a stranger, he never made you feel unloved or unwelcome, and he shared his faith in Jesus Christ through his words and actions. Those left to cherish memories of Allen include his daughter, Joy Jones and her husband, Jerry, grandchildren: Taylor Jones and his wife, Lori, Grayson Jones, and Chandler Jones and his wife Shoshana; great-grandson, Calix Jones, his brothers: Wayne (Pete) Haga, Don Haga and his wife Jewel; and numerous nieces, nephews, godchildren, claimed children, many special neighbors and friends, all of whom he adored. A Celebration of Allen’s life will be held at Aldersgate United Methodist Church, Bristol, TN at 11:00 am on Saturday, October 16, 2021 with Reverend Jerry Jones officiating. The family will share memories with friends following the service. The family encourages masking during the services when social distancing isn’t possible. In lieu of flowers the family ask that donations be sent to Aldersgate UMC, 136 Highridge Street, Bristol, TN 37620 or to the Bristol Emergency Food Pantry.

Allen Harold Haga, 85, of Bristol, TN, gained his heavenly body on Friday, October 8, 2021 at his home. He was born in Bristol, TN and was the son of the late Sam and Dottie Haga. In addition to his parents, Allen was preceded in death by his... View Obituary & Service Information

The family of Allen Harold Haga created this Life Tributes page to make it easy to share your memories.

Send flowers to the Haga family.