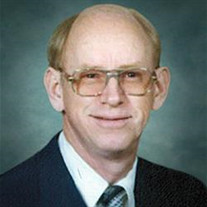 Albert C. Fleenor, Jr., age 87, of Bristol, TN, passed away on Tuesday, October 22, 2019, at Bristol Regional Medical Center. He was born on July 27, 1932 in Bristol, TN, a son of the late Albert C. Fleenor, Sr. and Wilma Scott Fleenor. Along with his parents, he was preceded in death by his sister, Nita Sue; brothers, Allen and Robert; and niece, Kathy. Albert attended Bristol, TN schools and graduated from East Tennessee State University. After high school, he was proudly drafted into the U.S. Army where he served in Korea as part of the Medical Corp and served in active reserves for over six years. He worked at Monroe and Sperry Unysis where he retired. Albert was a member of West Hills Christian Church for many years. He is survived by wife, Patsy; son, Albert C. Fleenor, III; sister, Wanda Hoskins; five nephews; and two nieces. A Graveside Service will be held at 3:00 PM on Friday, October 25, 2019 in The Heritage Chapel of Memories at Mountain View Cemetery in Bristol, VA with Dr. Gary Knapp officiating. Military Honors will be rendered by VFW Post # 6975. In lieu of flowers, memorial contributions may be made to Amedisys Hospice, 2025 Meadowview Parkway, Suite 101, Kingsport, TN 37660 or to ASPCA , P.O. Box 96929, Washington, DC 20090-6929 or by calling (800) 628-0028. Arrangements especially for Mr. Fleenor and his family have been made through Oakley-Cook Funeral Home & Crematory.

The family of Albert C. Fleenor, Jr. created this Life Tributes page to make it easy to share your memories.

Send flowers to the Fleenor, family.