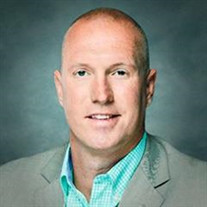 Adam Clayton Morgan, age 36, of Blountville, TN, passed away on Monday, September 2, 2019, at Holston Valley Medical Center in Kingsport, TN. He was born on April 5, 1983, in Bristol, TN, a son of Clifton Michael Morgan and Bonnie Morgan Owens. He is preceded in death by his maternal grandparents, James and Mamie Shives; and his paternal grandfather, A.J. Morgan. Adam graduated from Tennessee High School in 2001. He was an avid football and basketball player and earned a football scholarship to attend and play at East Tennessee State University in Johnson City, TN from 2001 to 2004. He also attended and played football at Pikeville College in Pikeville, KY. Adam married his high school sweetheart, Heather Simons, who he knew and loved for 20 years. He was the general manager for Ferguson Enterprises for eight years. He enjoyed sports, being outdoors, golf, hiking, hunting and spending time with family and friends. He was a Kentucky football and basketball fan and he loved his dogs. He is survived by his loving wife of 8 years, Heather Simons Morgan; mother, Bonnie Morgan Owens and husband Bud; father, Mike Morgan; brother, Josh Morgan and wife Valerie; sister, Latoshia Blackburn and husband Joshua; stepbrother, Rob Owens; stepsister, Sherry Owens; paternal grandmother, Wilma B. Morgan; mother-in-law, Cathy Sproles and husband Chris; nephews, Macklin and Campbell Morgan; nieces, Iona, Kyneswitha, Everild, and Augustine Blackburn; and numerous special friends. The family will receive friends from 1:00 PM until 2:30 PM on Saturday, September 7, 2019 at Oakley-Cook Funeral Home in Bristol, TN. A Celebration of Life will follow at 2:30 PM. In lieu of flowers, memorial contributions may be made to the Sullivan County Animal Shelter, 380 Massengill Road, Blountville, TN 37617, for Adam’s love of animals. The family would like to extend special thanks to his lifelong friend, Matt Harris, for his love and support. Arrangements especially for Adam and his family have been made through Oakley-Cook Funeral Home & Crematory.

The family of Adam Clayton Morgan created this Life Tributes page to make it easy to share your memories.

Send flowers to the Morgan family.